Litecoin (LTC), Bitcoin Cash BCH, Bitcoin SV (BSV), Zcash (ZEC), and Zcoin (XZC) are in a downward correction. One major price action common to the cryptocurrencies is that the bear market has been exhausted. The bulls are making frantic efforts to come out of the downtrend but lack buying at higher levels.

Possibly the momentum can extend to $63 if the bulls are successful. Conversely, if the bulls fail to overcome these levels, LTC will continue its fluctuation below $43. The bears can take advantage to break below the $40 support. This will further depreciate the coin to $35 low. Presently, Litecoin is at level 53 of the Relative Strength Index Period 14. It means that the coin is in the uptrend zone and it may possibly rise.

Bitcoin Cash (BCH) is in a bear market. The crypto has been consistent in its bullish run until when the price reached the overbought region. In the overbought region of $280, sellers emerged to push prices downward. In its initial fall, BCH fell to $226 low and resumed an upward move. Unfortunately, the subsequent upward move by the bulls was resisted at $250. Since on April 10, the upward move has been restricted below $250. Bitcoin Cash has been trading below $250 resistance for the past two weeks because of stiff resistance. 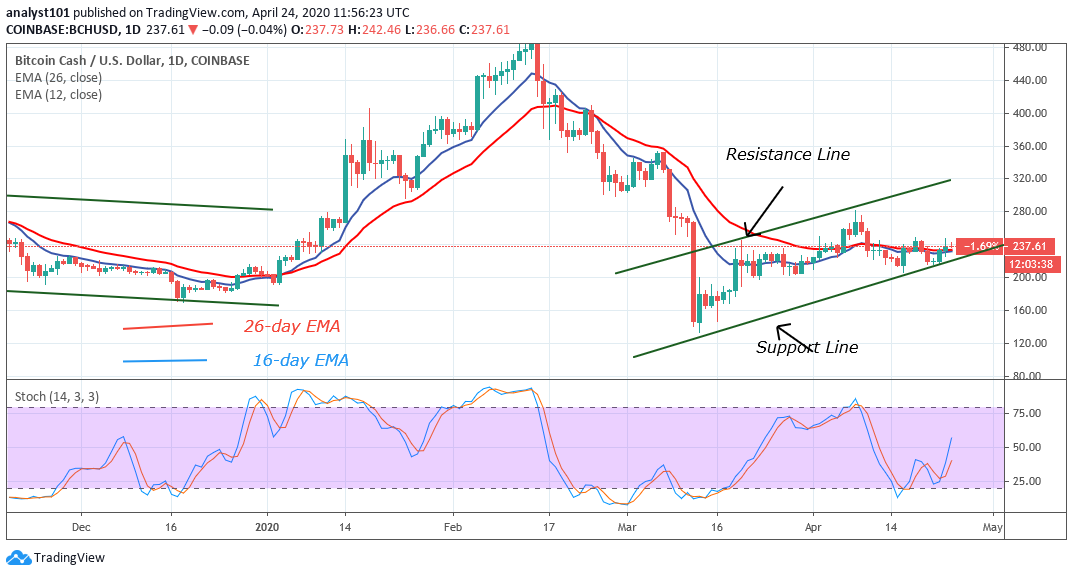 Yesterday, BCH rebounded and tested the $250 resistance. Price was resisted to a sideways move. On the upside, BCH will rise to the $350, if a breakout occurs to eliminate the resistance levels of $250 and $280. The coin can as well drop if the bears break below $210 support. Presently, the coin is above 40% range of the daily stochastic. It means that the coin is rising. 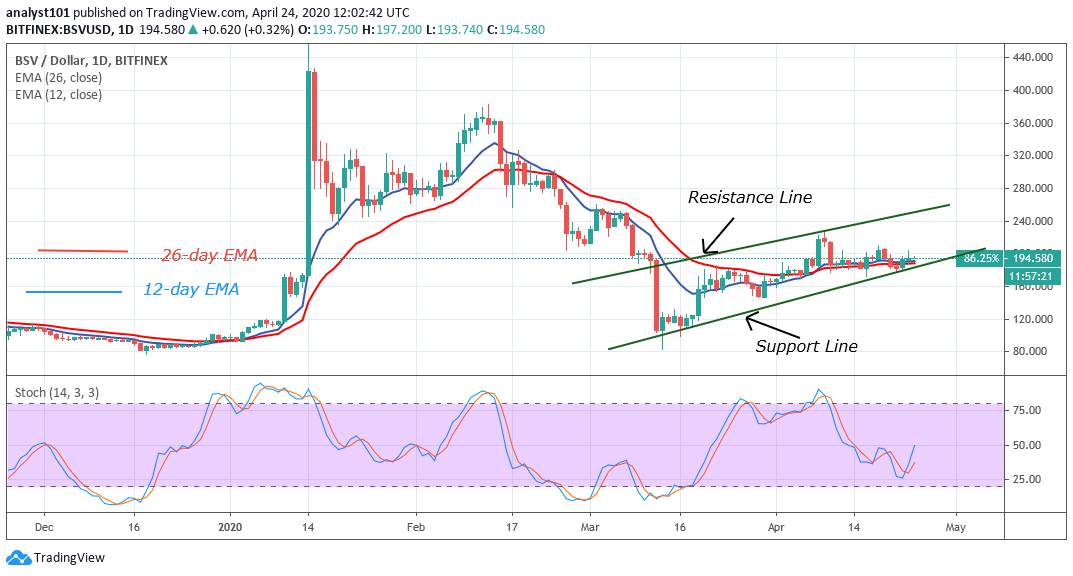 Bitcoin Satoshi’s Vision (BSV) is in a bear market. The coin has been recovering after it fell to a low of $104. BSV rose to a high of $220 and became overbought. The upward move was terminated as sellers emerged to push prices downward. Sellers pushed the coin to a low of $176 and it resumed consolidation. Meanwhile, the cryptocurrency is now fluctuating between $176 and $210 since April 10. From the daily stochastic, BSV is above 40 % range indicating that the market is in a bullish momentum. 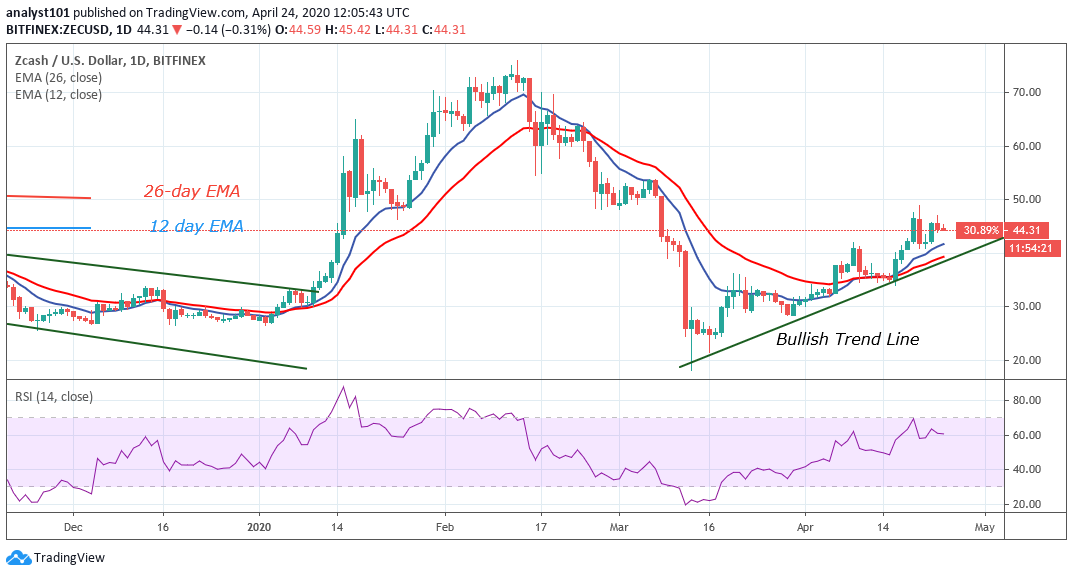 Zcash (ZEC) was earlier in a bearish market. From its recent low, price is making a series of higher highs and higher lows. A trend line is drawn showing the support levels of price. The market has risen to $48, and it is approaching the overbought region. The coin is likely to fall in the overbought region. Meanwhile, ZEC is at level 62 of the Relative Strength Index period 14. This indicates that the coin is in the bullish trend zone. The price is likely to rise. 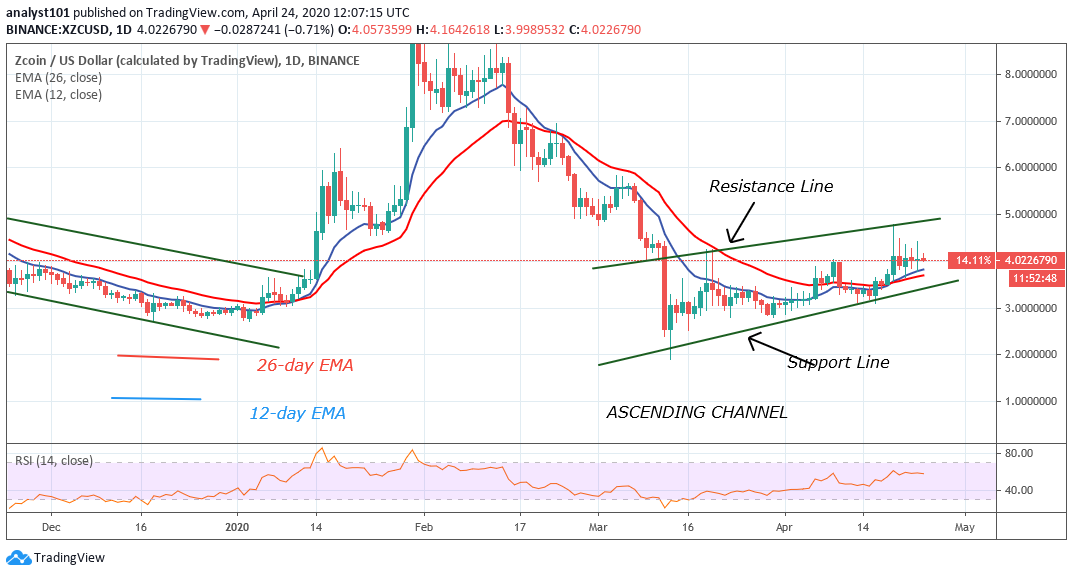 In the last bearish impulse, Zcoin fell to $2.49 low and commenced an upward move. In its upward move, ZEC rebounded twice but was resisted at $4. Since March 12, Zcoin has not broken above the $4 resistance. Today, ZEC is trading at $4.075, The Zcoin is still at the bottom of the chart as it lacks buying at a higher level.